It’s always better to be safe than sorry when hiring a company to do any type of repair work on your home. Garage door repairs are no different. There are thousands of unethical garage door companies (sometimes referred to as “Bad Bobs”) that are preying on customers across the country. They rely on their deceptive company names and advertising to trick the customer into believing they have hired a reputable, neighborhood garage door company.

The following is an article that was published by Door & Access Systems Magazine in their Spring 2003 issue [pages 44-45]. The article sheds some light on several different tactics that the Bad Bob companies use, as well as some useful information for homeowners on what to look out for when selecting a garage door company. 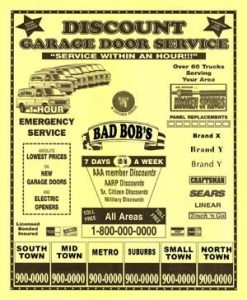 In the last few years, some dealers have discovered a way to make big money in the garage door business. Yellow Pages advertising is the cornerstone of the scheme.

Several details of the scheme are sleazy, many are deceptive, and some details are outright illegal. However, some dealers don’t care about that, and they end up giving the entire garage door business a bad name.

Here’s a general description of how the scheme would work for an unethical dealer we’ll call “Bad Bob.”

In his Yellow Page ad, Bad Bob’s strategy is to give the consumer the impression that he is credible. Here’s how he does it:

Instead, Bad Bob hires subcontractors who often have their own trucks and tools, and he pays them an attractive commission on each ticket. This gives them every reason to generate big tickets with every customer. Subcontractors are more likely to understand profit motive and are less likely to wimp out when Bad Bob tells them to rack up at least $400.00 in charges to each customer.

That’s another reason why this scheme works best in large-population centers. There are always plenty of distribution centers and wholesalers who unwittingly cooperate with the scheme.

What if Bad Bob gets caught? No problem. He just takes his boatload of money and moves on to the next big city.